Many people I've discussed bitcoin with say this is old news. It may be old news for some but its new for those late to the party.
Bitcoin was fun and there were plenty of opportunities for some people to grab some cash along the way but now that its in the news a lot and the general public are paying attention it can't be possible for everyone to make money.

Also, there will be more regulations by various governments making cashing out and buying a hassle.
Bitcoin will not be going to $250k or other nonsense. Grab your ankles. 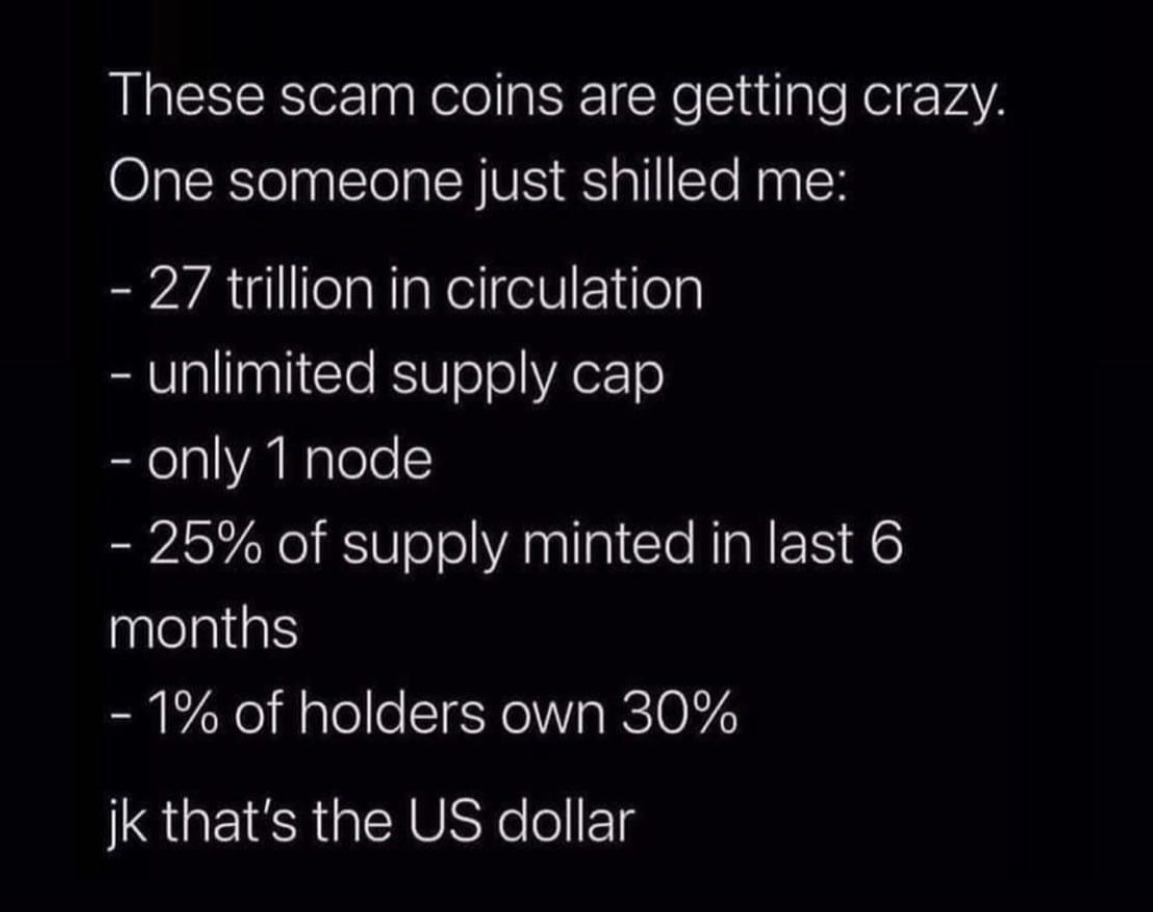 A death in Cryptoland​

Blitty:
Tron buys the dips and sells the rips


he has a mysterious amount of btc:

fwiw, I got buried last week

Tron:
fwiw, I got buried last week
Click to expand...

I thought we was hodling.

But how are you supposed to fuck the man with a central bank coin?

Think this is all part of the plan though

Any non stablecoin is just a pyramid system. Hodlers require new "investors" to buy so that the value rises. Meanwhile the exchanges take their cut on buys and sells as do the miners etc. Great scheme.

Companies like Google, Facebook, etc. are sucking naive people into crypto as if this is the next Internet revolution, where you should get in early and ride the wave of innovation.

They purposely mix up the technology and the "currency" as though they are the same. Buying crypto doesn't buy you the technology unlike Google and Facebook, which are an actual business.

Crypto, is just based on faith like any other medium of exchange like gold and the US$ and if you need to go through some exchange to transact then you're at the mercy of that exchange and any other country that wants to regulate it.

Only reason crypto prices are so high is the FOMO effect as naive people all jump on the bandwagon hoping to cash out selling to the next sucker. If you ask 99.9% of the people why they are speculating on cryptos, they will say because prices are sure to go higher as more people want to use and it's the future. This is not an explanation...as a currency it sucks due to its extreme volatility.

I wouldn't want to sell something for $1,000 and accept $1,000 worth of bitcoin that could drop 10% in value overnight, so, what's the point of buying and using crypto ? This craze is no more than a "tulip bulb" mania. Unfortunately, it's still early in the mania and there are still lots of people waiting to climb on board.

Nobody seems to be able to logically explain how BTC is the future of currency. Probably because it isn't.
Last edited: May 28, 2021

When scommer explains a fraud it pays to listen. Good lookin out scomburg.

^^^^^^^^^^^
Pal its comments like this that confirm my belief that you are a sharp dude and DEFINITELY one of the top 5 legal minds here at GL.