Jeff Bezos is going to space

Hope his trip lasts a bit longer than Richard Branson's, who was in "space" for like 8 seconds.

The landing of the delivery device t’was super deluxe

25 feet into the EDGE OF SPACE.

These billionaire "astronauts" are being a bit ghey. I wanna see one of them tap-dance on the Moon, not this 10-minute boomerang bullcrap.

Yeah these billionaire astronauts are a bit ghey. I wanna see one of them tap-dance on the Moon, not this 10-minute boomerang bullcrap.

I dig it. If you think about it in comparison to Mercury, they're really doing 1000x more. Def a ways to go... but pretty neat in itself while simultaneously magnifying the accomplishments of Apollo.

But yeah, a bit ghey.

How bored r these fuks?

-Guys, this peddling thing is all fine and dandy but what I'd really like is for you to launch me in the sky from inside the head of a giant metal penis.
-Why? You're of no use to anyone up there. You're a glorified database coder with a God complex.
-STFU Brad and make me a flying penis.
-FINE. 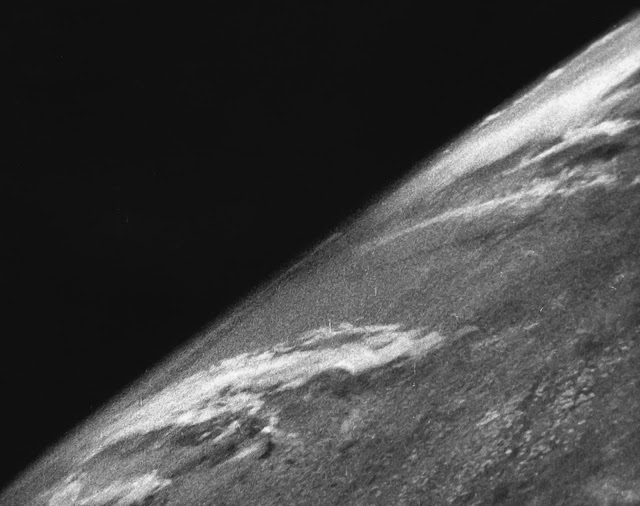 On October 24, 1946, not long after the end of World War II and years before the Sputnik satellite opened the space age, a group of soldiers and scientists in the New Mexico desert saw something new and wonderful—the first pictures of Earth as seen from space.

The grainy, black-and-white photos were taken from an altitude of 65 miles by a 35-millimeter motion picture camera riding on a V-2 missile launched from the White Sands Missile Range. Snapping a new frame every second and a half, the rocket-borne camera climbed straight up, then fell back to Earth minutes later, slamming into the ground at 500 feet per second. The camera itself was smashed, but the film, protected in a steel cassette, was unharmed.
You must log in or register to reply here.
Share:
Email Share Link