The Rangers have really been consistent the whole year but OMG they have gone to another level. The forechecking keeping the puck in TB's zone was top notch. Don't know if 9 days off had anything to do with it but Ranger goalie >>> TB one so far. Vas was real shaky the first game.

Russian goalies looking SHARP so far. Bounce back for Vas of TB who had been shaky first two games of series.

It's a series again. 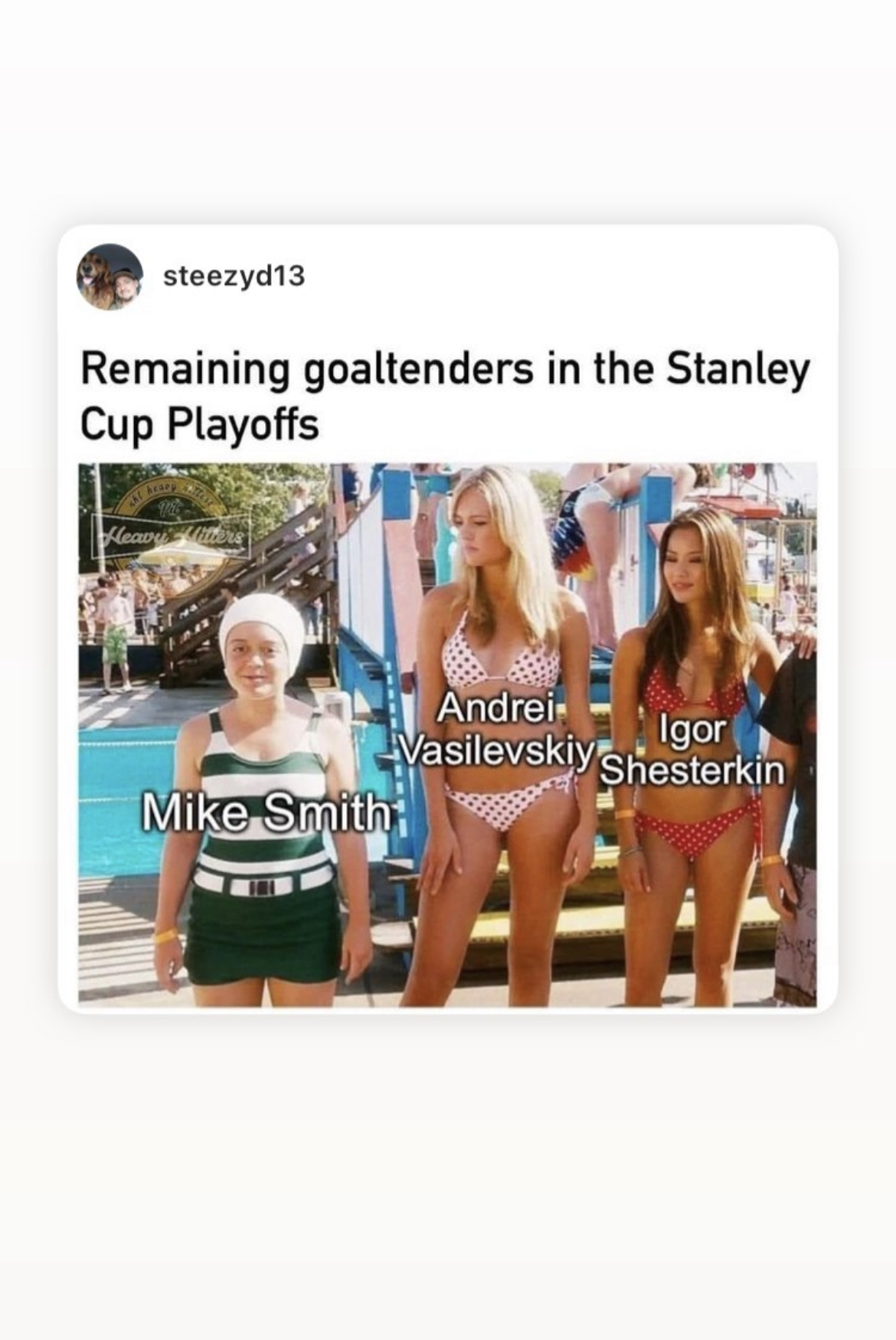 Stevie, I like the Rangers team this year but no true Flyer fan should ever root for the those guys ..... okay maybe against the Pens, Canadiens for sure, probably Bruins too for me. Any others IUO Stevie?

PS Sad to say but being away from Philly this long really losing interest in the FlyBoys ..... but damnit start showing something!

If Kucherov was an NBA player, he would be one hell of a point guard. Has eyes in the back of his head.

MrMonkey:
Stevie, I like the Rangers team this year but no true Flyer fan should ever root for the those guys ..... okay maybe against the Pens, Canadiens for sure, probably Bruins too for me. Any others IUO Stevie?

PS Sad to say but being away from Philly this long really losing interest in the FlyBoys ..... but damnit start showing something!
Click to expand...

Probably the Devils for that Stevens hit (I pull for them a bit because my bro is a HUGH fan).

Yes we are getting nothing as Philly fans currently! Grrr!

The Lighting are back!!!!

The Bolts close out the East tonight

And Stamkos nets both goals as Tampa closes out the Rangers.

Nice run by New York but they ran into a buzz saw that hasn't lost a playoff series in 3 seasons.

Now the Lightning face the Avalanche, who pasted the West.

I'll be pulling for the three peat, but I wouldn't bet it with a ten foot schlong!

Should be an epic fokkin final

Bummer I really wanted the Rangers.

Since some here might not have time to look into the breakdown of TB-NY series, I will give my amateur analysis.

As much as you think of TB's Vas brilliance in goal and their scoring capabilities, their positional FORECHECKING defense was off the charts the last 4 games of the series. Pavat in an interview after game 5 keep going to back to defense, defense, being the key to winning.

Watched every minute of every game and can't remember a single odd man rush (3-2, 2-1) by the Rangers after game 2. Vas had a few great saves last night but Stersterken stood on his his head! Easily TB could have had 4-5 goals. Though the Stamkos first goal probably was one of the easiest he faced.

TB's first line Stam, Kuch, and Pavat accounted for 23 of the 43 points (G+A) in the series. Though the last 4 games the other 3 lines were great in positioninal hockey both offensively and defensively. NY had absolutely nothing offensively the 1st two periods last night.

I believe TB just worn down the Rangers. Last 40 days and 20 intense games was too much for them though TB had to play their best to win series!

Look, don't know much about Colo other than they seemed to have breeze through first 3 rounds. More rest than TB but only have played 3 more playoffs games than Colo. Has Avalanche coach even said who's the starting goalie for game 1? That's the key for me in this series, we know what Vas brings to the table from past playoff experience but what about Colo goalies? I mean Colo's playoff run so far hasn't included many tense, close game moments so far?

Just seeing now at one site Ava -190 TB +165 to win series. Guess I might be unpleasantly surprised how good Colo is come Wednesday.

Just looked at a few less used stats but Shot Attempts was TB ad of 50-23 after 2 periods. And whatever Scoring Chances means 12-2 TB ad for that time.

Pretty cool seeing they do this after East finals .....

Good news I heard Cooper when asked doesn't know if Brayden Point will play first game but almost sounded like a definite he plays in the finals at some point. Thought it before but don't see him playing Wed night and definitely not 2nd game if TB wins first.

Saw his initial injury and looked bad like could have been ligament knee damage and knew not so once he was able to skate at least. A guy under contract at 9.5M for the next 4 years you don't mess with especially if you continue winning without him.

Didn't realize how fast the Avalanche were and ran circles around TB last night. Yes went into OT but Colo dominated the game. Vas was a little rattled initially but keep Lightning in game. Colo. goalie looks like he can be had (TB scored 2 soft goals) but with the SPEED the Avalanche possess will TB get enough shots off to score? Unless TB can slow these guys down or Vas stands on his head for 60 minutes not seeing a three-peat.
You must log in or register to reply here.
Share:
Email Share Link