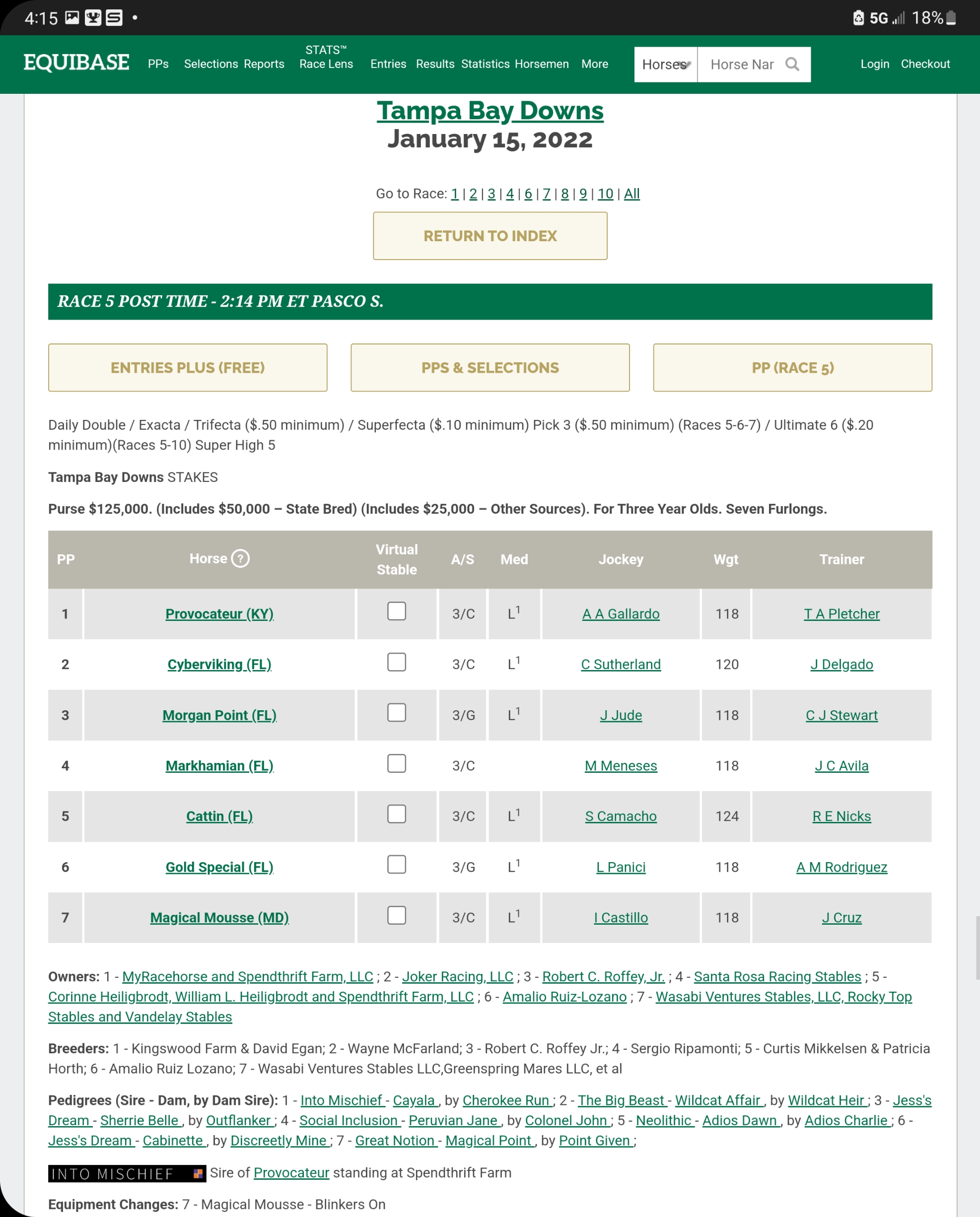 image isn't working for me

Blitty:
image isn't working for me
Click to expand... 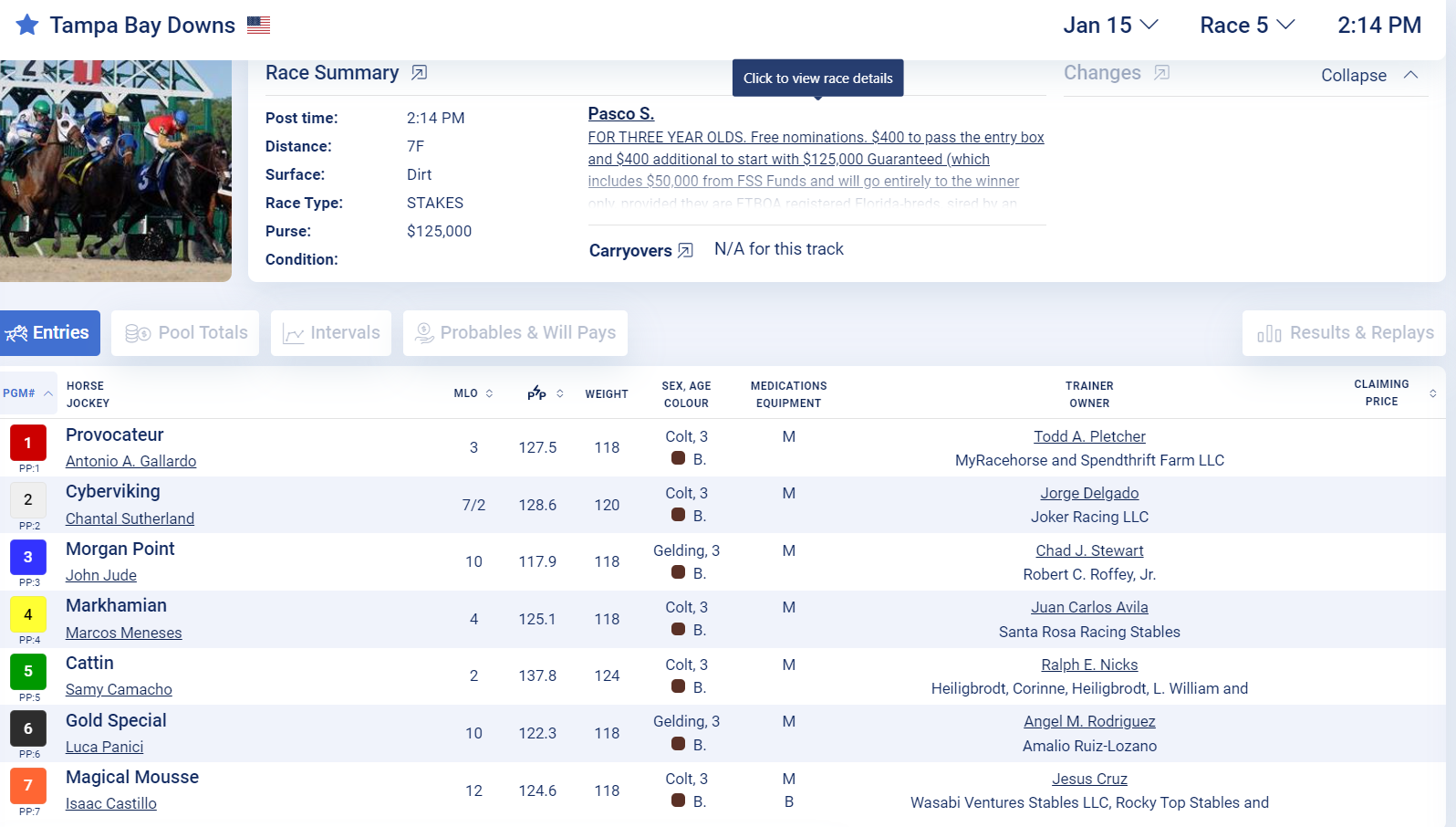 I will record the race and post it here. 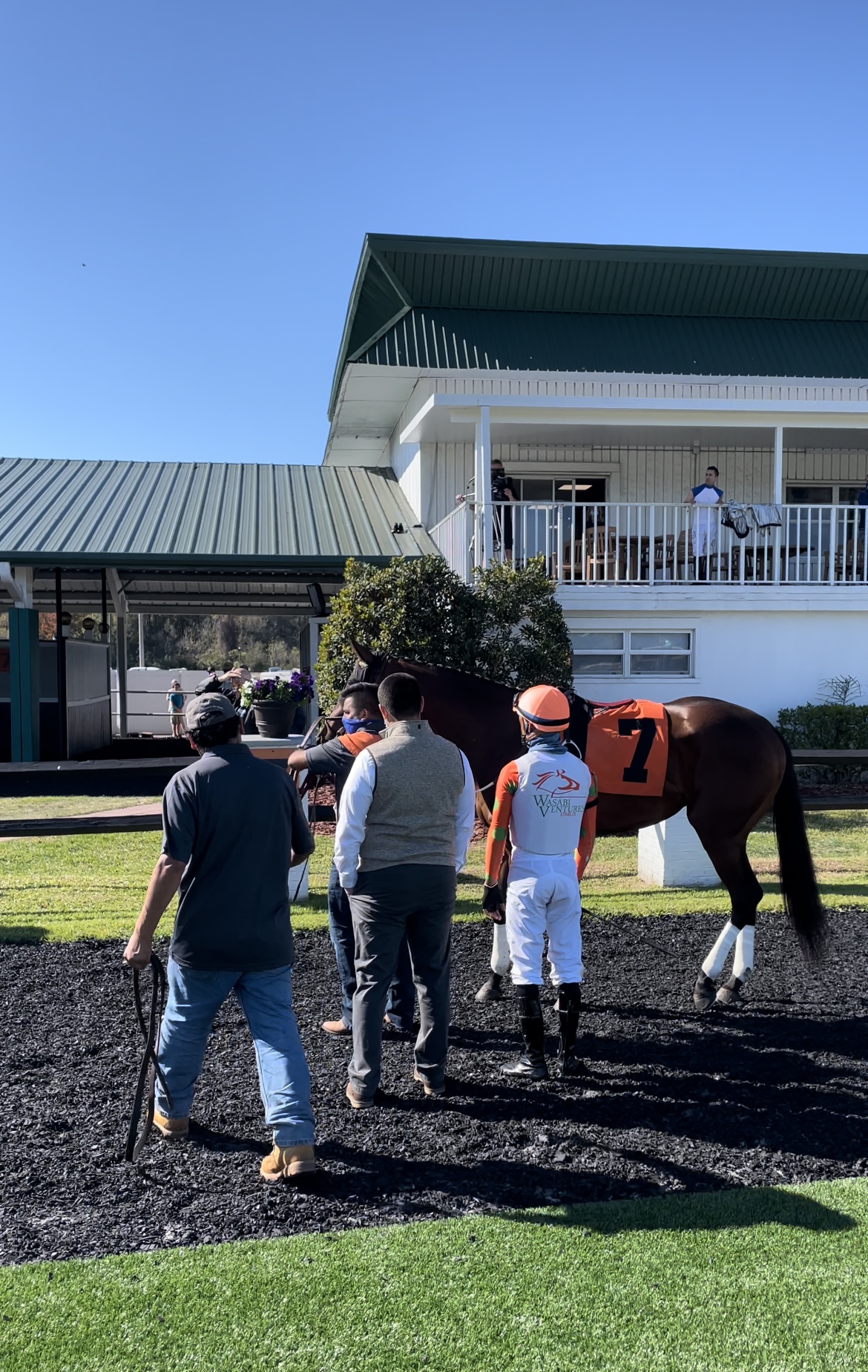 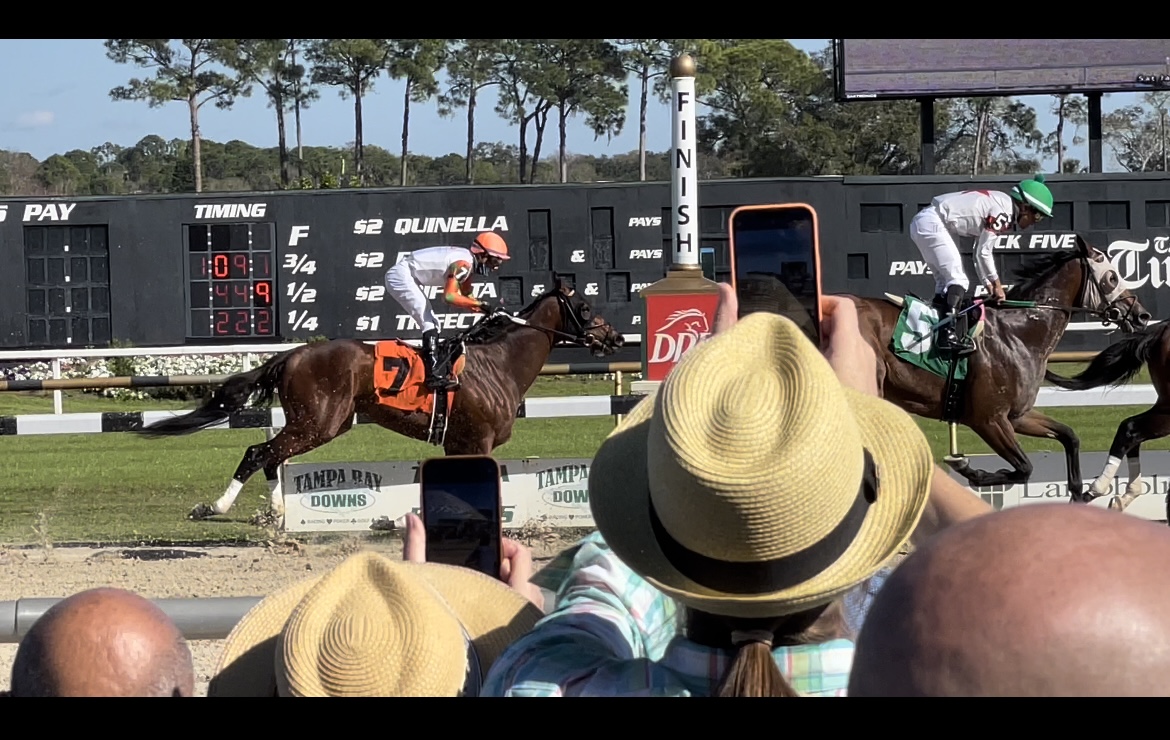 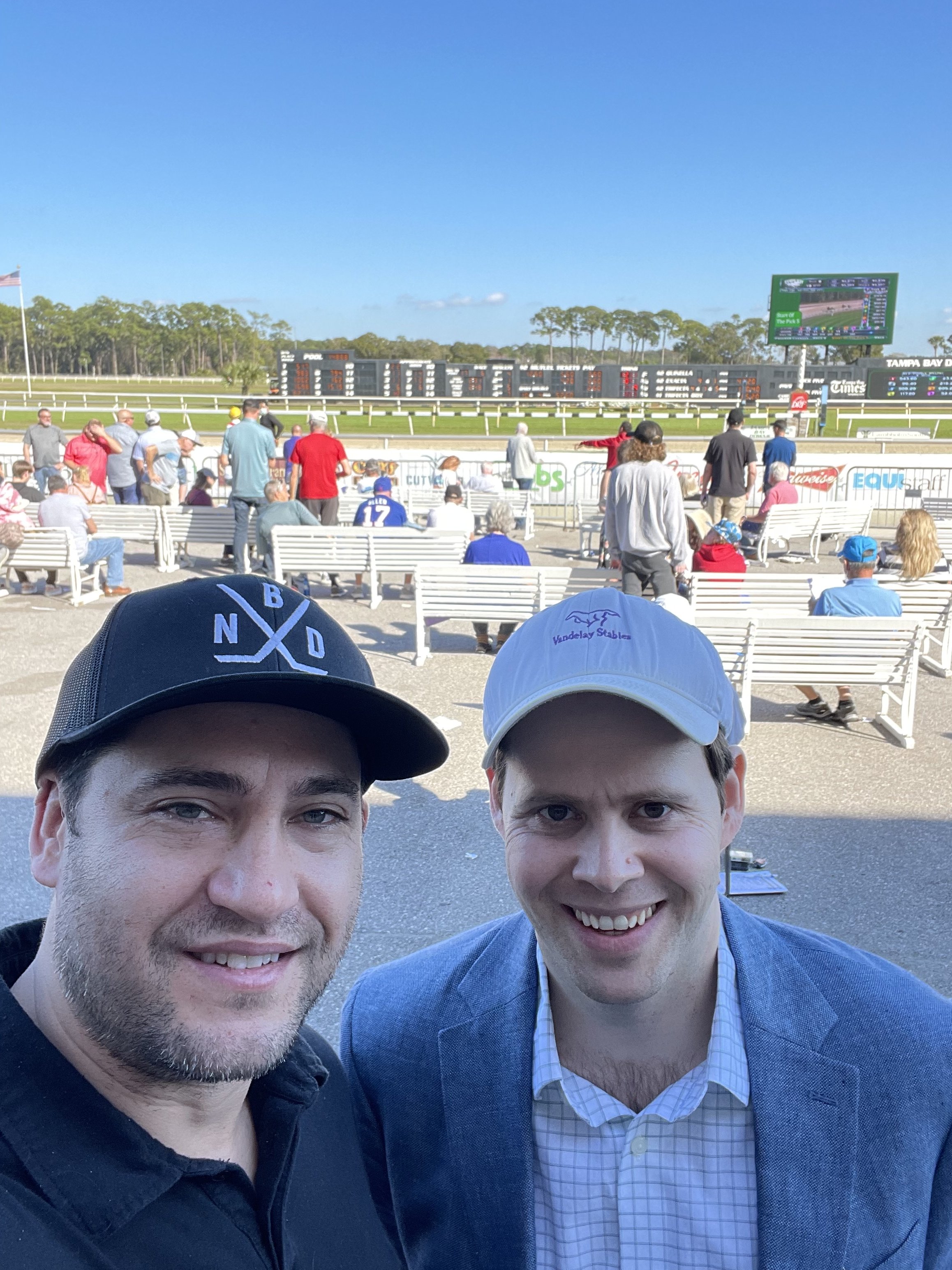 Maiden claimer winner to stakes race? Was the race restricted?

Boners Equine EXPLODES would be a sexy thread title

look like he could never get a clear lead and ended up in a speed dual. I'm gonna call that a bad trip

We're gonna run in the Sam f. Davis for derby points. I don't agree with it but that's the play.

did blitty get to ride on magical mousse

Nah, he already had a panamanian jockey

plommer:
Bone bone, your hoss is still eligible for NW2/3 races, which is a good condition to be eligible for as he looks like he has some ability and would win those.
Click to expand...

Yeah. We're gonna keep taking shots until the competition gets really steep (maybe that'll be the Sam F. Davis as it's a G3). He's 4th but maybe a lucky trip or race shape is the difference between some bigger money here. If not he'll probably go after the conditions once he ships back up to Monmouth (April). Will be a deserving 3-1 at those conditions.

As long as he stays healthy he's a nice runner that should pay most of his way.

Didn't see Race #2, but Race #3 looked the same as Race #1, fighting for the lead and burning a bunch of energy at the start. Race #1 it didn't seem to matter as he was just too much horse for the rest of that field, but here it obviously took a toll.

Definitely seems like there is a lot of potential here, would just be nice to see him get a clean lead or to settle into position right behind the leader to save some energy. Whatever the case, super cool that you've got a competitive horse on your hands considering the countless number of duds out there!

Boner_18:
Yeah. We're gonna keep taking shots until the competition gets really steep (maybe that'll be the Sam F. Davis as it's a G3). He's 4th but maybe a lucky trip or race shape is the difference between some bigger money here. If not he'll probably go after the conditions once he ships back up to Monmouth (April). Will be a deserving 3-1 at those conditions.

As long as he stays healthy he's a nice runner that should pay most of his way.
Click to expand...

I owned part of a couple of claimers at Woodbine in the late 90's. My partners often let me make the call when it came time to enter ie what claiming tag. The one mare we had was a nice 16-20k claimer but the trainer wanted to find allowance races for her and she raced her eyeballs out vs tougher mares and would end up on the fringes picking up small cheques for 4th/5th. When my trainer asked us if we wanted to enter her for $20k where she had a hugh chance but might get claimed my partner gave me the final say and I said put her in for $20k because I wanted to win a race instead of finishing behind other horses.
When we saw the entries we were thrilled, a 7 hores field and she looked like the one to beat, until I noticed a big name trainer entered a horse taking a drop fromn $40k in the same race. I knew it could be because that horse was in decline so I wasn't worried.
Race day we were 2nd choice at 2-1. My partner asked me if I thought she would win and I told him she has one horse to beat. He bet $15k to win with a bookie and told me he "needed" to win this race.
Long story short, we closed at 2-1 and battled the favourite the whole way then pulled ahead and won by a couple. She was claimed. Lots of people in the win photo. That horse was popular, getting claimed a few times that year, she won for $30k with a juice trainer and got claimed and never raced again.
So basically the thing was this, horses often only have so much to give. Running them over their heads takes a toll as they try hard in defeat.
I wanted to make it easy by running vs lesser horses for the chance to win and to not tke everything out of her.
You must log in or register to reply here.
Share:
Email Share Link