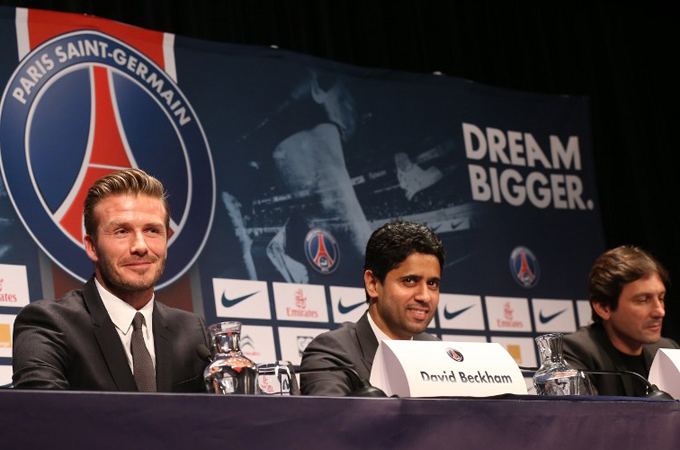 beckham is donating all of his salary to charity

Perfect for Beckham. Evades taxes and gains lots of PR.

Also, PSG have Pastore and Lavezzi!

Its only a 5 month contract so it works out for both parties, PSG is looking to get to that manu/barca/madrid status in European football. They certainly get the increased visibility with a Beckham signing. 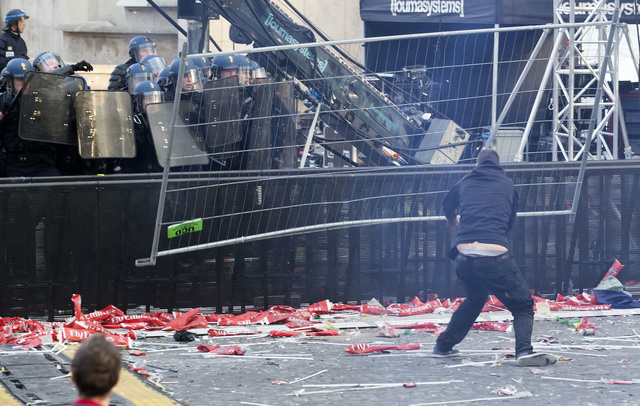 Paris is a fuckin shit hole. France is a case study in how not to handle immigration.

fiveteamer:
Paris is a fuckin shit hole. France is a case study in how not to handle immigration.
Click to expand...

fiveteamer:
Paris is a fuckin shit hole. France is a case study in how not to handle immigration.
Click to expand...

When was your last visit to Paris?

Rj they deleted that second video from liveleak. Was that ultras or cops going after the rioters, they didnt mess around.Paris is even beautiful during rioting. Matty:
When was your last visit to Paris?
Click to expand...

The only gamelivers who's opinions matter on French immigration are those that live in Paris.

gregm:
Rj they deleted that second video from liveleak. Was that ultras or cops going after the rioters, they didnt mess around.Paris is even beautiful during rioting.
Click to expand...

That was a good old fashion african beating by the cops.

I saw that chelsea is playing mancity in yankee stadium on May 25th and man city owners looking to get into mls . It reminds me when I was just a kid when pele came to New york, thats what got me into soccer. Soccer and tennis was a huge craze in the 1970s in Dallas and California with kyle rote jr and pele.

David Beckham could return to Los Angeles Galaxy as an MLS owner
Beckham may be tempted to buy his old club in California, or consider starting a new franchise in glitzy Miami

As part of his original contract with Major League Soccer, Beckham had the right to purchase an MLS franchise at a reduced rate. The only exception to that clause was the potentially lucrative New York market, where the owners of Beckham's one-time cross-town rival Manchester City are rumoured to make the next big move, possibly within weeks, by stumping up the $100m buy-in fee for a second New York team based in Queens.

The process of MLS awarding the 20th franchise, which they insist will be in the Big Apple, has put the ambitions of other would-be franchise holders on hold, but there are two paths Beckham may wish to pursue if he is serious about a goal of ownership in MLS, the league in which he reached three finals in his last four years with the LA Galaxy, winning two.
to be a partner in a buyout of AEG at his old club. AEG had already been making noises about selling prior to Beckham's departure at the end of last year, and developments since have suggested the LA soccer arm of their operations might be ripe for an ambitious new ownership. AEG's owner, Phil Anschutz, has recently taken a more hands-on role in trying to bring an NFL franchise back to LA, at the expanding LA Live complex which includes the Staples Center.

Anschutz's return meant that Tim Leiweke, the voluble executive who played a key part in bringing Beckham to LA (and who memorably claimed that "David Beckham will have a greater impact on soccer in America than any athlete has ever had on a sport globally") was edged out, and with something of a potential power vacuum, Beckham and his advisers may wish to make a move.

The other option may be to start up a franchise in a new territory. Recent stories have linked Beckham with a new team in Miami. The south remains underserved by MLS and while two Florida-based teams were the first failure of early MLS, in the forced contraction of the league in 2002, the sense among fans and execs alike is that the right franchise, with the right backing, would work well there now.

Orlando City's frontrunner status has been dented by state rulings that denied them crucial funding to build a new stadium, but Miami and Beckham would be an intriguing mix. The city has been aggressively reinventing itself with design districts, the high-profile Art Basel art fair and equally high-end shopping. Those who play the game of guessing Beckham's next moves by matching up the tastes of his wife would see Miami as a realistic option.

wish the cosmos (resuming play this spring in NASL) would get the stadium in flushing meadows, but they have cheap owners

Its hard to imagine now how great pele coming to the cosmos was for soccer in the states in the 70s. That Abu Dhabi's investment group that owns man city pays the expansion fee of 100 million for new york fc, beckham gets the galaxy or a team in miami. interesting article on ownership and the portland timbers success Have you ever been to an indoor soccer match potato, most americans would love that sport. All of these sports, soccer,arena football, wnba,indoor lacrosse,rugby,motogp or whatever should be looking and begging to get more sports gambling sponsorships and lines on their games. What would arena and wnba be without betting and its still not much. Its crazy in Europe that you have books like bet at home that sponsor tennis tournaments and sponsor soccer clubs like Bwin does with real madrid, boylesports and sunderland, mansion and tottenham,etc. Bwin sponsors motogp races and autoracing, you see sportsbook advertising everywhere at sporting events, on jerseys etc..

Sports gambling would build alot of these smaller sports with sponsorships and advertisements and people watching and gambling on them them and if the nfl, mlb and these pro leagues oppose sports gambling then dont take sponsorships or maybe people might watch something else. It would be great to have some other sports or have some competition for pro football and basketball and sports leagues( al davis and the AFl, USFL, or the ABA, WHA etc.) just for the slow times around mlb all star break and if these leagues continue to oppose sports gambling, so be it . miami is no good, any gringo area up north will appreciate it more

ig-spending Paris Saint-Germain are prepared to put together a staggering 100million deal to land Wayne Rooney.

Manchester United striker Rooney has emerged as the French side's No1 target this summer, and their mega-rich Middle Eastern owners are prepared to pay him a staggering 15m-a-year - after tax.

That would put the England star, 27, on the same wages as PSG's current star striker Zlatan Ibrahimovic, who is being tipped for a move back to Italy this summer just one season after moving from AC Milan.

The new Ligue 1 champions would be willing to go to 40m as a transfer fee, and hand Rooney a four-year contract to try to lure him away from the Old Trafford giants.

But they will face competition from French rivals Monaco, while Chelsea and Arsenal are also watching developments - although the two Premier League clubs would struggle to match the riches on offer across the Channel.

Check out all the latest News, Sport & Celeb gossip at Mirror.co.uk http://www.mirror.co.uk/sport/footb...rs-wayne-rooney-hunting-1905269#ixzz2U8RpZl7g

There's nothing like spending other people's money and the Portuguese is hoping Abramovich is about to splash 100m
Jose Mourinho has drawn up his summer wish list to turn Chelsea back into champions.

And Mourinho's rebuilding plans will not come cheap as he has insisted they will need a minimum of SIX players to reinforce the first team squad.

Mourinho, who will be free to join Chelsea on June 2, wants three defenders, two midfielders and a striker with Atletico Madrid striker Radamel Falcao at the very top of his hit-list.

Real Madrid boss Mourinho has already agreed a three-year contract worth 12m-a-year - and has had guarantees about the investment in the club.

It is believed Chelsea owner Roman Abramovich will make the biggest investment in the squad since Mourinho left Stamford Bridge six years ago.

That could see the Russian billionaire bankroll a staggering 100m spending spree this summer with Chelsea's 50m flop Fernando Torres likely to be sacrificed to try to help address the effects of Financial Fair Play.