Nazim Kadri wasn't even with the team for their last two road games. People are saying it was the team's choice, not his, not to fly him out there.

There will be quite a few changes in the off-season - I guess one could be him.

Overreaction much? This Bruins team is potent as fok. Columbus-Boston should be a doozy.

I don't know what a doozy is but I know I used it correctly.

The Leafs have to make changes just out of salary cap necessity.

Kadri is a funny case though. You could say his contract is very team friendly - $4.5 mil - so don't trade him.

But then if his contract is that team friendly, it should bring a better return for him in a trade.

Also, with all the money Leafs will be spending on their young group, can they really afford to pay that much for a 3rd line center? Probably not. When he was 2nd line, sure, but now they gotta cut corners all over the place.

Why did they have to sign Marleau to that ridiculous deal where, as a 40 year-old, he'll make $6 mil next year.

do people realize that Marchand is one of the best players in the league, if not the best. Just wondering, cause I don't hear that much about him. ...except all the face licking stuff 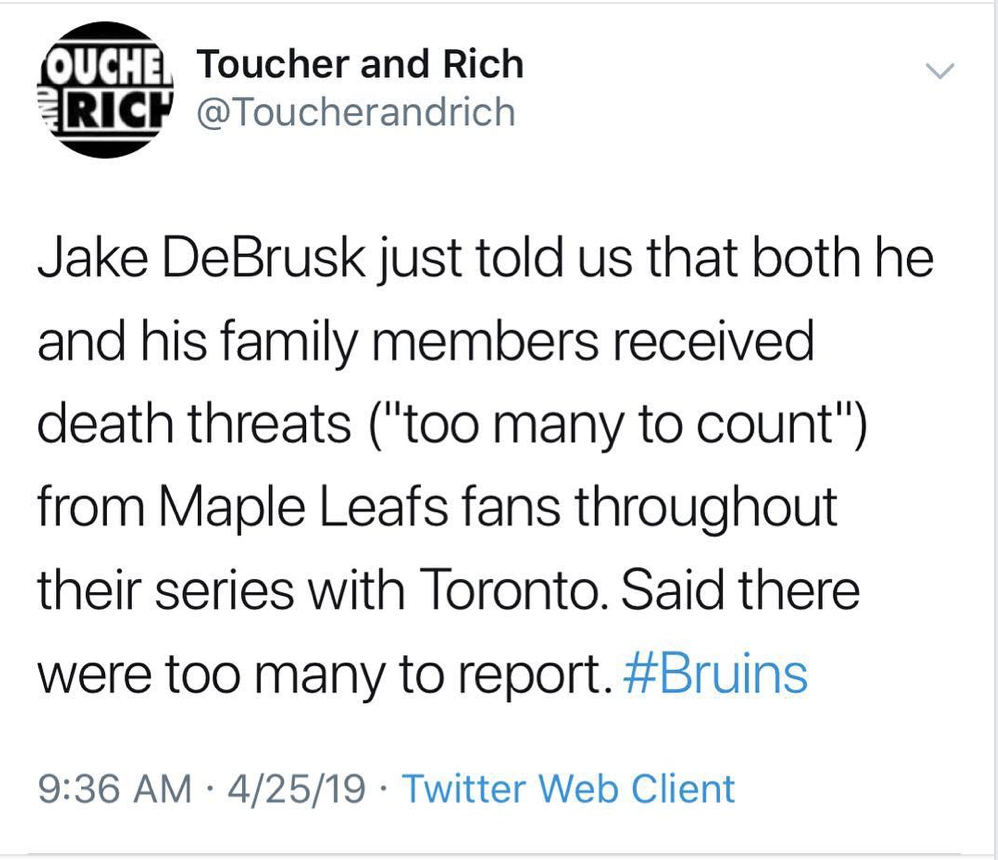 I have a great appreciation (and fear) of Brad Marchand. He was outstanding for Team Canada in the last World Cup. I believe he led the tournament in goals including scoring the Championship winner.

As for the current NHL playoffs, I got nuthin'. I'm trying to think of some reason to want anything - not coming up with it.

I have had a morning habit of checking the NHL.com website for scores, and I was fixing to do that this morning when it occurred to me, there is nothing I could see there that would make me feel any kind of way.

So I checked it and I was right. Nothing.

Disaster for ratings. Mildly interested in BOS/CBJ and will be following the Sharks from a distance, cause as usual west coast games are way too late.

Every year they say it will be a disaster for ratings.

This has been the most exciting playoffs ever.

Always felt there should be a bigger advantage for the top teams. Maybe let the division winners get a bye into 2nd round. I mean you compete eighty games for what? A possibility of an extra home game?

seems like there's some interesting ways these series can go in 2nd round. I'm looking forward to it
What to make of this Carolina? They made the Caps look very bad n tired.
Columbus

stupid Colorado? are they gonna get manhandled by the big stiffs from San Jose. looks line the line is smaller than I'd expect, so somebody giving Colorado plenty of credit.
Dallas St Louis looks like a battle of tanks.

I tend to cheer for my Team Canada guys but as always, there are some of those most everywhere. On that basis, I should probably cheer for Boston. I don't know that anyone has a more valuable combo to us than Marchand/Bergeron.

I ain't cheering for Boston though.

I guess I want Carolina to fail because I see them as a prime trade partner for the Leafs - we wanna pry some defense out of them - so better to not let anyone's value get too high.

That looks like could be a fun fast series. Carolina NY I mean. Why is the West so much uglier and lumbering than the East? It's been that way forever

FME! No game posting, I promise this time!
You must log in or register to reply here.
Share:
WhatsApp Email Link