The unit next to ours is occupied by a woman in her mid-40's. She likes to yell, and I mean yell as though she was having the argument of a lifetime with a loved one. No one ever yells back, so we thought, maybe she's a in rocky phone relationship with someone.

We're witnesses to her yelling ritual 2 or 3 times a week.

One night, three cops were standing in front of her unit. I didn't ask what they were doing there, I just assumed it had to do with a noise complaint from another neighbour. Didn't think much of it.

Then last night, I was downstairs in my storage locker, and I noticed that stuff in the adjacent locker was neatly tagged with the owner's name and full address. As it turns out, it is my crazy neighbour's stuff.

I googled her name and found her LinkedIn. She claims to be a marketing professional, but I don't believe she goes to work during the day. It seems obvious that she neglected to update her profile when she left her last job. It happens.

Then I found her Facebook page. Her wall is public. Her most recent posts are a bit weird and self-indignant, but par for the course for the average Vaguebooker:

Okay, she's been through some tough shit and was probably inebriated when she decided that that was Facebook material. We've all been there. Let's keep going:

Sounds reasonable to me. *nods slowly* Moving on: 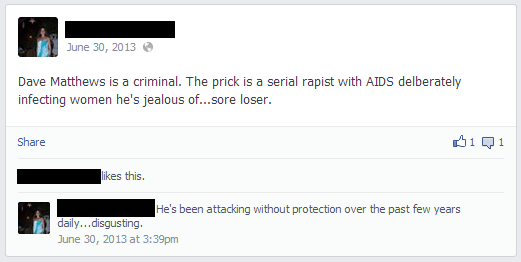 Note that she self-liked her post and then followed up on it. 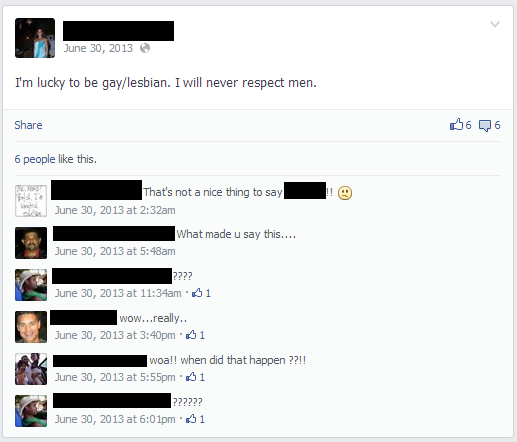 Oh dear. Crazy man-hating pretend lesbian. So she's prolly been badly abused at some point in her life. I'm weirded out but I still feel for her. Let's see what's next: 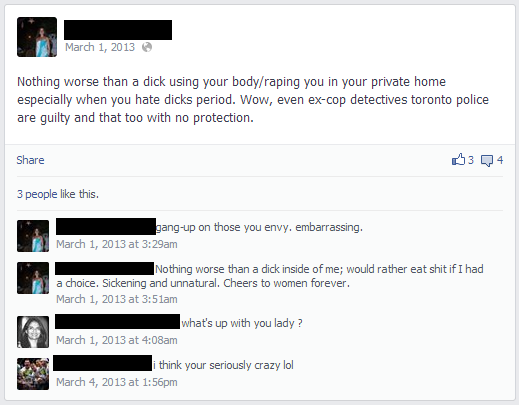 I reckon we should set her up with poster madmaxx.

Wow. This keeps up and you might take the craziest neighbor award from Pucky for 2014.

If I had to guess, I'd say the chick has been raped.

She also claims that her mom was raped and murdered. Her dad allegedly died of cancer a while back. But then, in another post, she mourns the simultaneous murder of both her parents.

WTF do I do with this. I have had a crazy neighbour evicted before 'cause his antics were preventing me from sleeping, but this is a new building with good sound insulation so she's really more of a distant, creepy background noise.

I do agree with her though. There's nothing worse than a dick inside of me.

I mean, I am just assuming on that one, but it seems like I would agree.

I nodded at that part too. Sick and unnatural. Would rather eat feces.

Matty said:
She also claims that her mom was raped and murdered. Her dad allegedly died of cancer a while back. But then, in another post, she mourns the simultaneous murder of both her parents.

WTF do I do with this. I have had a crazy neighbour evicted before 'cause his antics were preventing me from sleeping, but this is a new building with good sound insulation so she's really more of a distant, creepy background noise.
Click to expand...

Chick is off her fuckin rocker and belongs in an asylum. I'd just be weary, and if anything happens, well, then obviously call the authorities. Do have have a building like board or anything you could anonymously submit information to and request she be removed?

is it wrong that I am kinda looking forward to the updates on this?

Last night when dinner was being delivered she walked by to go drop off her recycling and she kept trying to look past me and into the apartment. Prolly just to confirm that the baby cries are coming from here. But who knows.

don't let her near JL!! I fear for his penis!

Things I should NOT say, but to hell with it. Here it is.


1. Set her up with Plommer
2. Send her a politely worded email to her work address asking her to stop yelling
3. Ask her if she has ever heard of Gamelive Forum
4. If you ever are around the house alone and you know she is home,(and are brave enough)... you should make some loud, un-holy noises and give her some of her own medicine. I used to like to place a speaker on the offending neighbour's wall and play some Slayer or GWAR some such thing.

Great post Matty. It is funny nowadays how much you can find out about people without too much hassle. I, too, will be looking for updates.

Not sure inviting her to the forum after you've just made jest of basically a bunch of things she's violently opinionated about is such a great idea. Also Matty being next door adds to that not being a great idea.

but Quince is the residing head psycho.


but this lady might give him a run for the money

What is going on in her picture?-hard to see.

I agree Matty ought to not poke the bear in this situation, but it is in my nature to think of things that may push her slightly over-er the edge.
You must log in or register to reply here.
Share:
WhatsApp Email Link