Ruth Hamilton says space rock came through the ceiling, landing on her pillow at her Golden, B.C., home​ 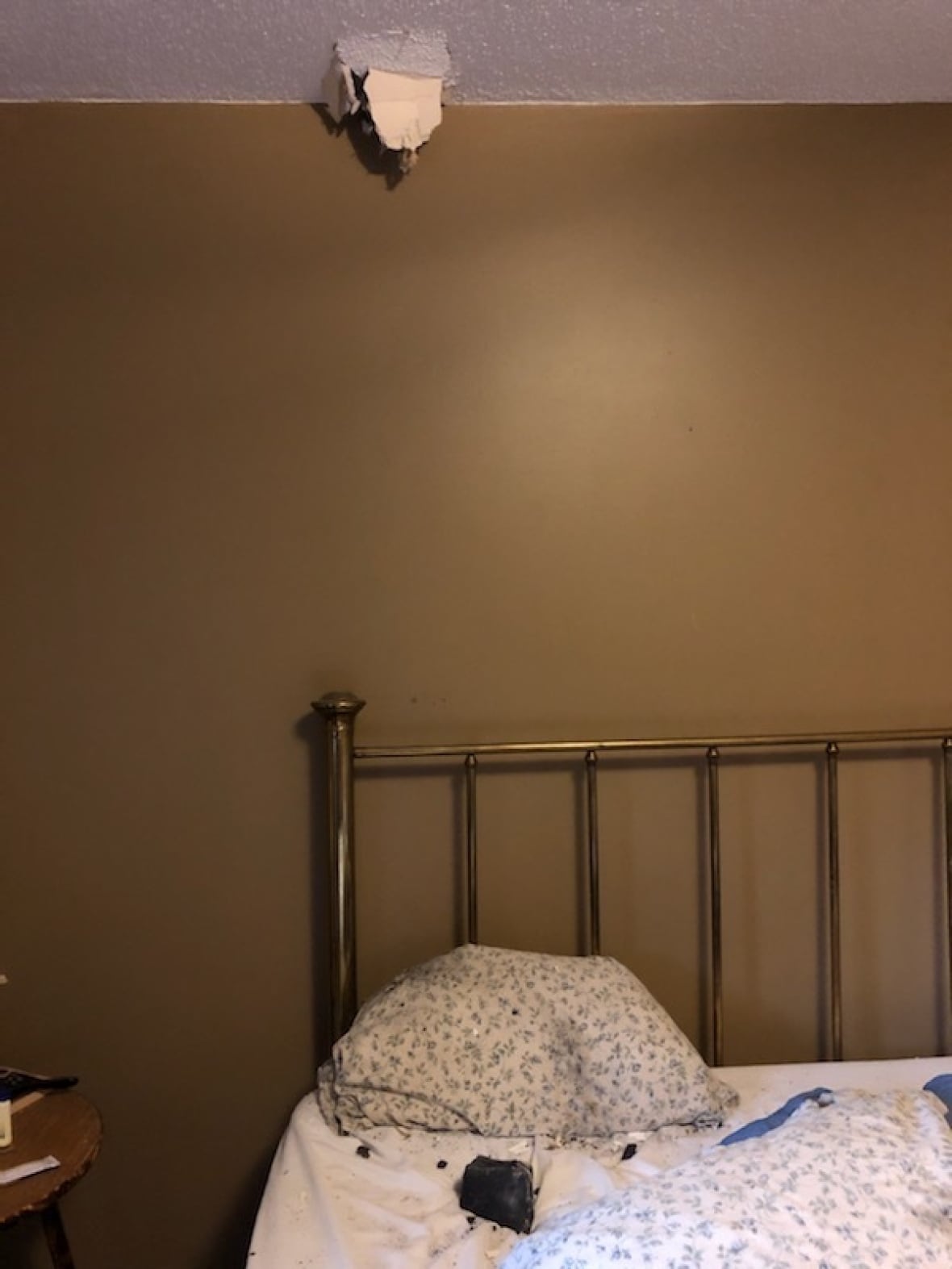 Ruth Hamilton had been asleep for hours in her Golden, B.C., home when she awoke to the sound of her dog barking, giving her a moment's notice before a rock from outer space hurtled into her bedroom.

"The next thing was just a huge explosion and debris all over my face," Hamilton recalled in an interview Tuesday.

"Talking to the operator, she was asking me all kinds of questions, and at that point, I rolled back one of the two pillows I'd been sleeping on and in between them was the meteorite."

A charcoal-grey chunk of rock roughly the size of a melon had plummeted from space, tearing through Hamilton's roof before coming to rest on her floral pillowcase, inches from where her head had been moments earlier.

"I was shaking like a leaf," said Hamilton. "You're sound asleep, safe, you think, in your bed, and you can get taken out by a meteorite, apparently."

Initially, Hamilton didn't know it was a meteorite. She and an RCMP officer dispatched to investigate suspected it was debris from a construction site on nearby Highway 1, which runs through the town, nestled in the Canadian Rockies.

"He called up there and they said they had not done any blasting that night. But the workers had seen a meteorite, or a falling star, explode and there was a couple of booms.… Then we knew that it was a meteorite that had crashed through my roof," Hamilton said.

Hamilton reported the find to a team of experts at Western University in London, Ont., who confirmed the rock was indeed from space.

"It's certainly a meteorite," said Peter Brown, a professor with the university's physics and astronomy department.

"Everything about the story was consistent with a meteorite fall, and the fact that this bright fireball had occurred basically right at the same time made it a pretty overwhelming case."

Hamilton plans to send the meteorite to Brown and his team. Brown said they hope to identify the type of meteorite within the next month, but he suspects it fell from the solar system's main asteroid belt.

Brown also said it's not the first time a meteorite has fallen into someone's bedroom before; it happened in Indonesia within the last year.

Hamilton said she didn't tell anybody about what had happened for a few days while she absorbed the experience.

Apart from being shaken up, she wasn't hurt. She said she plans to keep the rock once researchers have finished their work.

Brown said the university team is asking anyone with security or dashcam footage of a fireball over the Golden area around 11:30 p.m. PT on Oct. 3 to send the video their way.

The town of Golden, population 3,700, is near the B.C.-Alberta border, around 200 kilometres west of Calgary.

Ruth Hamilton says space rock came through the ceiling, landing on her pillow at her Golden, B.C., home​

"I was shaking like a leaf," said Hamilton. "You're sound asleep, safe, you think, in your bed, and you can get taken out by a meteorite, apparently."
Click to expand...

C'mon Ruth, like you've never heard about the dinosaurs?

I'm kinda jealous. I want my own meteorite.

That is a weird part of British Columbia, very close to Creston where Fundamentalist Mormons have multiple wives.
You must log in or register to reply here.
Share:
Email Share Link